I recently had a mom inquire about her 8 year-old daughter who was having complete meltdowns when it was time to turn off the computer. It didn’t matter what it was. It happened even when it was to leave to go out to dinner with the family. So the first thing I explained to this mom is that this is what we call a ‘Manipulative Tantrum’ This is a tantrum a child throws to try to get his or her own way or to get attention. The way I knew it was the manipulative type is simply due to her age.

The other type of tantrum is a ‘pure’ or ‘true’ tantrum, which is an honest expression of a difficult emotion such as anger, frustration or hurt. These types of tantrums lessen significantly by age 4 and dissipate completely by 5. This is when it is easy to tell these 2 apart, which is important to know and understand because the way you handle these 2 types of tantrums is completely different. It can take some insight into your individual child and the patterns to good at this. Because while uncommon, manipulative tantrums can happen earlier. One of the best examples of this I have ever seen is on a video from America’s Funniest Home Videos years ago. IT was a toddler maybe 2 years old who threw himself on the ground. The parent with the camera left the room and the child would immediately grow quiet. Stand up, look around the corner and as soon as he spotted parent, threw himself on the ground again and proceeded to tantrum. My daughter also went through manipulative tantrums very early, before she even hit 2. I could tell because after the first couple of times she threw herself on the floor and realized it hurt, she would “throw” herself down in stages by first plopping down in a sit, then laying back, then slowly laying her head on the floor. Then she throw her fit.

So of course, your first job is figure out which type your child is having which most of the time is pretty clear based on age and/or the actions. Then move forward with acting accordingly, which I go through in detail on our class on Tantrums. 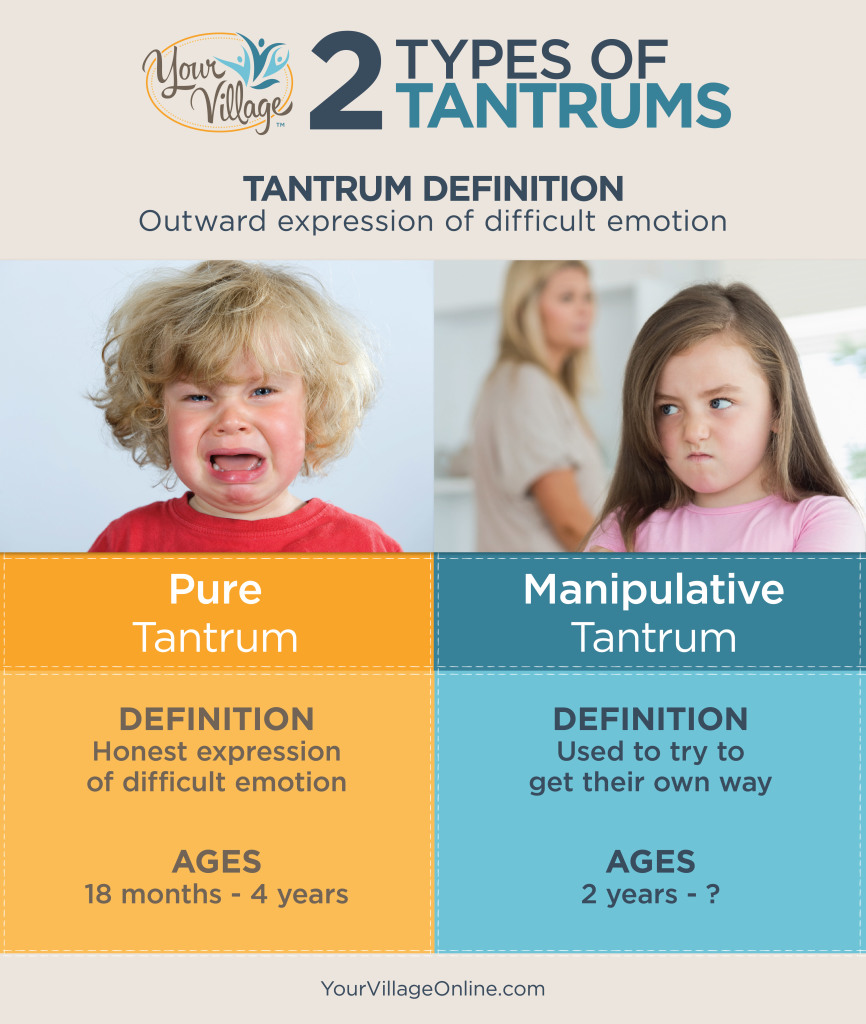 The best way to handle the manipulative tantrums, as I shared with this mom, is by ignoring them altogether. This renders this type of tantrum ineffective. If the goal is to get her own way or to get attention, she is getting neither. You can have a conference with your child, during a quiet time, before you start implementing this technique, letting her know that the behavior will not be tolerated and from now on you will be ignoring when she behaves in such a manner.  Then once the tantrum ensues, ignore it, even leaving the room altogether if you need to. Once she calms down. Do not mention it. Engage with her over something you would normally engage about, as if it never happened. For more on both manipulative and true tantrums, you can see our class on Tantrums.